The cultivation of virus-free plants is one of the hot research topics worldwide. This is because Virus diseases have a huge impact on crop yields and have long been an important factor restricting the sustainable development of agricultural production1. For example, potato leafroll virus (PLRV) is one of the most severe viruses to attack potatoes2. Just being infected with PLRV can reduce potato yields by 40-60%3. In addition, compared with the single Plant virus infection, the yield loss caused by the two kinds of Plant virus mixture was more severe3.

Plant viruses are obligate intracellular parasites. They grow and reproduce only within the host's living cells and can rapidly expand through asexual reproduction4. Plant viruses usually use insects as virus transmission tools to continuously infect healthy plants5. Although in agriculture, chemicals are an important weapon to control Plant virus infection, but side effects also exist, including the deterioration of soil environment and so on6. This makes the cultivation and planting of virus-free plants continue to attract the attention of researchers around the world7.

This study demonstrates how stem cells and neonatal daughter cells of the Arabidopsis shoot apical meristem (SAM) inhibit cucumber mosaic virus (CMV) infection. During the course of the study, it was found that the stem cell modulator WUSCHEL (WUS) was able to respond to CMV infection and inhibit the accumulation of the virus in the central and peripheral regions of the meristem. Ultimately, the findings reveal a conserved strategy for protecting stem cells from viral invasion in plants and provide the molecular basis for WUSCHEL-mediated broad-spectrum innate antiviral immunity in plants.

1. Verify the assumption that the top of the SAM is free of viruses

Figure 1: Virus Distribution Map of the Arabidopsis SAM after inoculating the leaves with CMV

Nine days after inoculation, we observed accumulation of CMV in the shoot and rib zone of the SAM, but not in the central zone (CZ), peripheral zone (PZ), or floral primordia (Fig. 2). Even more surprising, the researchers found that CMV clustered below the WUS and stopped moving upward. Exploring whether the expression domain of WUS blocks the movement of viruses, or whether WUS inhibits the accumulation of viruses, has become the next research direction of the research team. 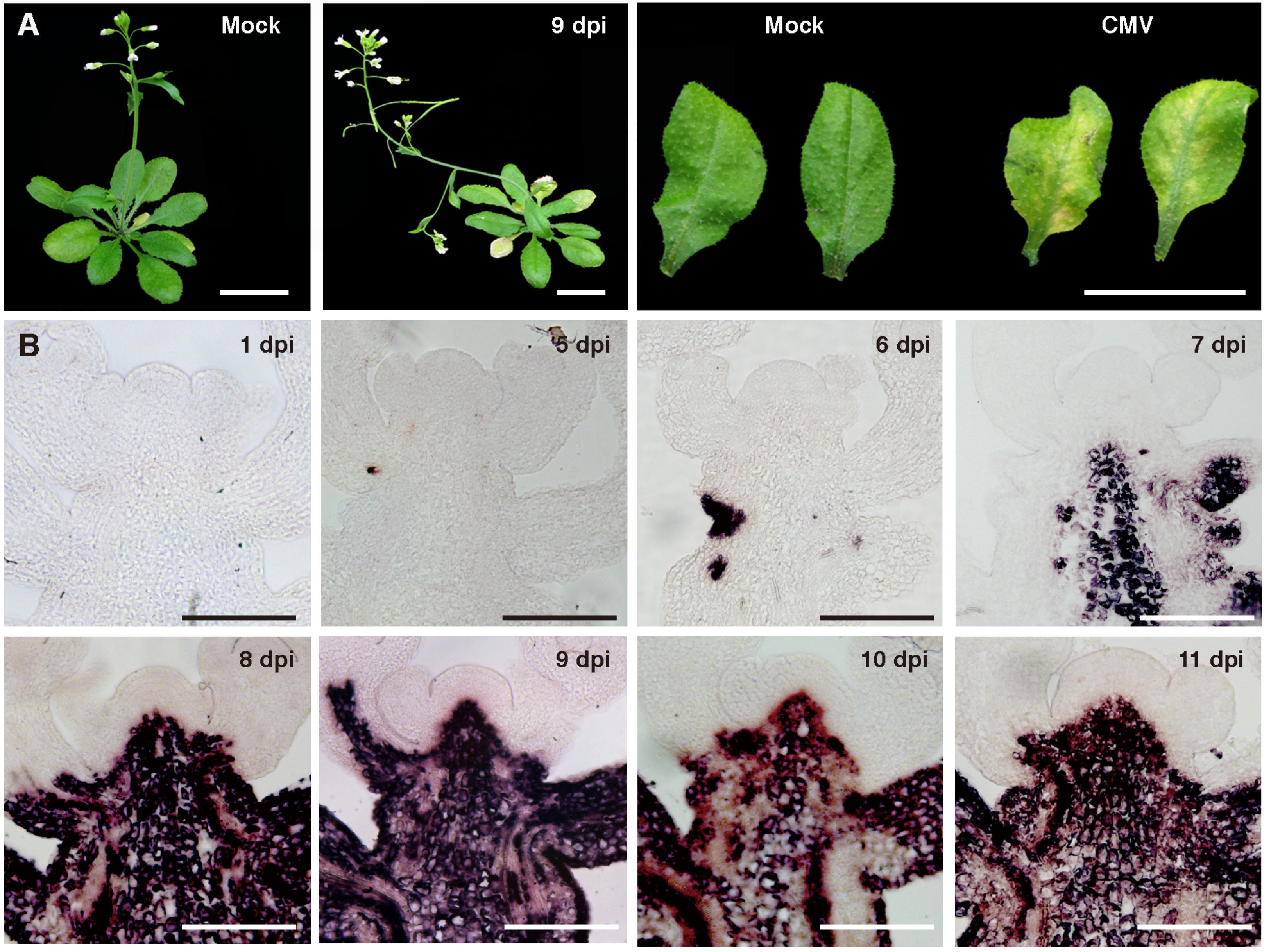 2. Resistance of WUS protein to CMV

The research team performed a serial section-based mismatch assay. One of the slices was used to detect the expression of WUS, and the other slice was used to detect the presence of CMV. Although the virus was directly inoculated into the region where the WUS protein is located, CMV was only detected below the region of WUS protein (Fig. 3). This illustrates that the region where the WUS protein resides, including stem cells and organizing centers, is resistant to CMV invasion.

3. Further verification of the defense mechanism of WUS protein against viruses

To verify, whether the WUS protein is involved in host defense against viruses. The researchers used dexamethasone (DEX) to induce WUS protein in leaves after CMV inoculation. In the absence of induction, 89% of plants were infected with the virus. By inducing the activity of WUS by DEX, 90% of the plants were protected from CMV invasion (Fig. 4). This indicates that WUS protein effectively assists the host's defense against viruses.

Figure 4: CMV accumulations in plants with (J) or without (I) DEX induction for 7 days

To investigate whether WUS inhibits protein accumulation by accelerating protein degradation or inhibiting protein synthesis, thereby achieving defense against viruses. The researchers treated tobacco leaves with the proteasome inhibitor MG132, thereby inhibiting the degradation of GFP in leaves and causing GFP to accumulate. But with the addition of WUS, GFP did not accumulate (Fig. 5A). Subsequently, pUBQ10::WUS-GR; 35S::GFP plants were treated with MG132 and it was found that WUS inhibited protein synthesis, rather than promoted protein degradation (Fig. 5, B and C). In further experiments, it was found that WUS-mediated protein inhibition was not virus-specific, but had an effect on all protein synthesis. 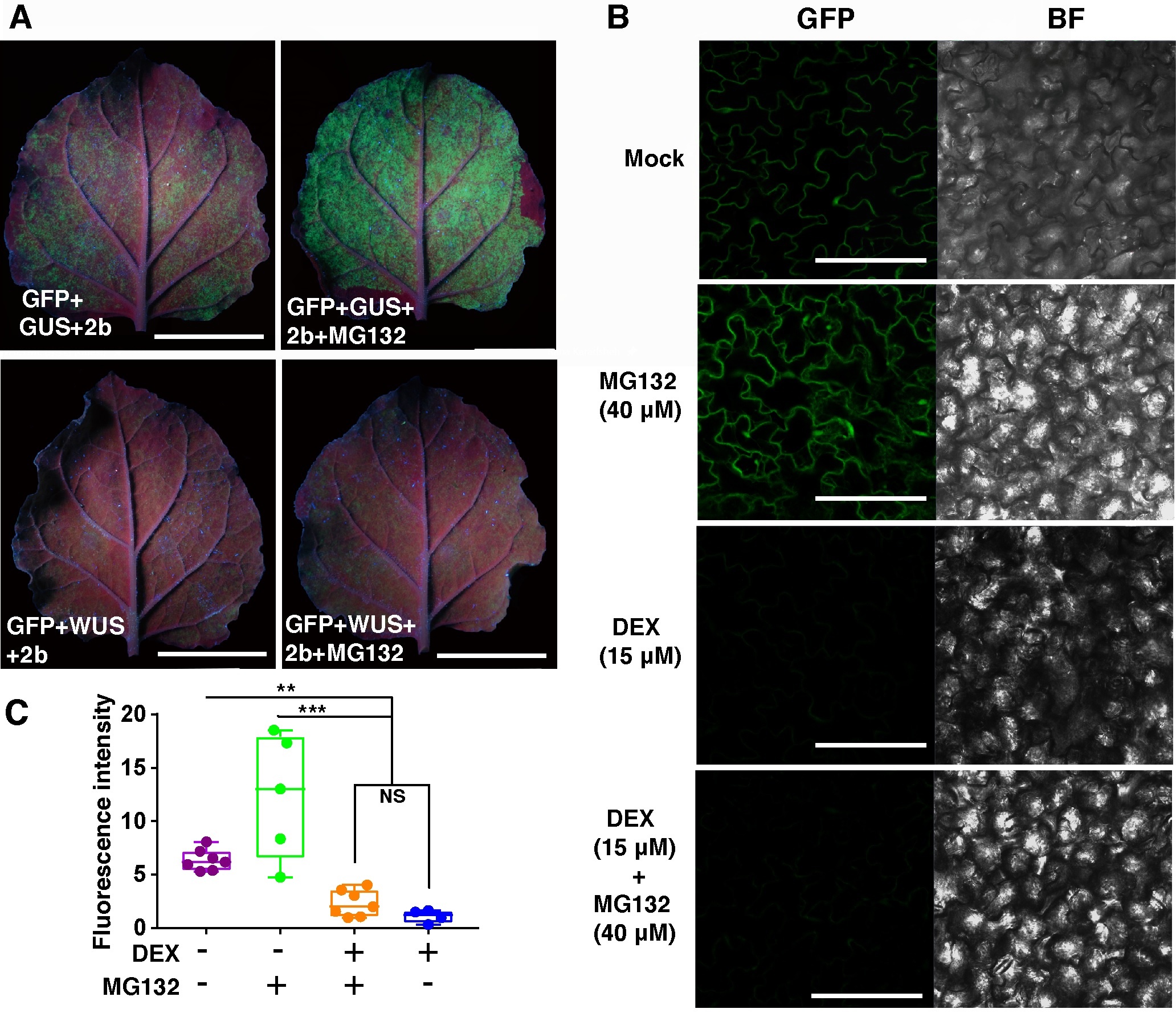 4. Explore more virus-free plants with the help of WUS protein

The WUS protein is able to repress MTase transcription in SAM. To some extent, it inhibits ribosome assembly by negatively regulating MTase, resulting in an overall decrease in protein synthesis. This makes WUS protein is essential for innate antiviral immunity in plants.

In general, as a parasitic strategy, the virus is able to hijack the host for protein synthesis and thus complete its life cycle. However, plants have also evolved various mechanisms to protect them from viral infections. This article shows how WUS-triggered antiviral immunity protects stem cells and neonatal daughter cells from viral invasion. In stem cells, WUS is able to directly inhibit MTase transcription, reduce overall protein synthesis and limit viral replication and spread (Fig. 6). 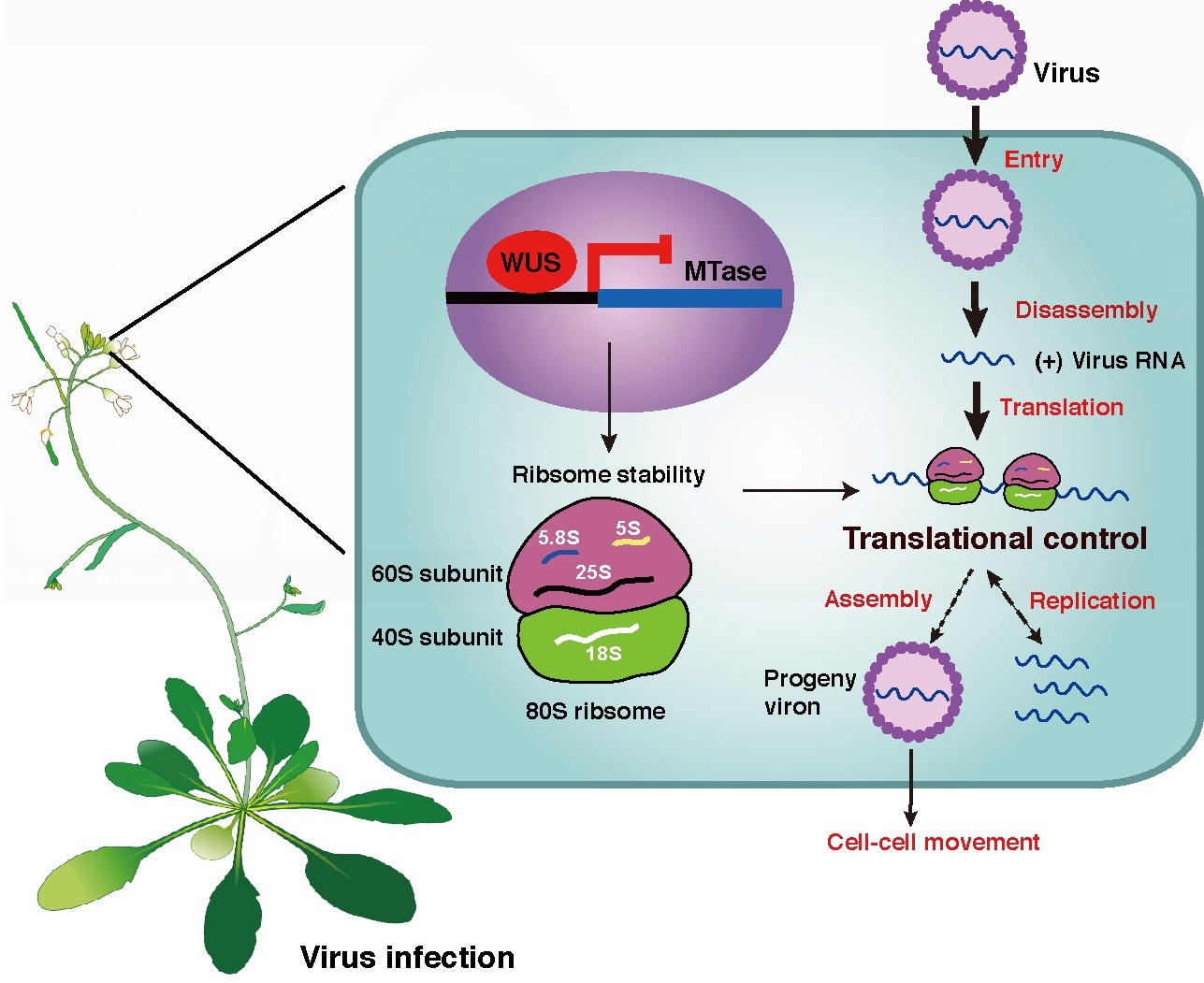 • Superior impurity tolerance: It has superior tolerance to common impurities in reverse transcription such as ethanol, isopropanol, etc.

2. Brunt, A. A., & Loebenstein, G. (2001). The main viruses infecting potato crops. Virus and virus-like diseases of potatoes and production of seedpotatoes, 65-67.