Renal cell carcinoma (RCC) is the most common urological malignancy after prostate cancer and bladder cancer, and its incidence has continued to rise in the past decade1. Since RCC is not sensitive to radiotherapy and chemotherapy, gene-targeted therapy provides a new direction for its treatment. Some targeted drugs are currently being used in clinical practice2. In addition, RCC has a high tendency of malignant metastasis, and early identification and study of the biological mechanism of RCC metastasis and progression can help to more accurately predict clinical outcomes and develop targeted drugs3.

（Picture comes from National Cancer Institute. If it is an infringement of your copyrights, please contact us.）

Circular RNAs (circRNAs) are a new class of endogenous noncoding RNAs4. According to studies, circRNAs play a key role in the pathogenesis, metastasis and development of various malignant tumors such as RCC5. However, the underlying mechanism of action of ciRS-7 in RCC therapy remains unclear.

This study found that ciRS-7 was highly expressed in RCC tumor tissues and cell lines and could be used as a prognostic marker. Subsequently, it was further confirmed that ciRS-7 acts as a "ceRNA" of miR-139-3p, which can prevent TAGLN degradation and promote the development and metastasis of RCC through the PI3K/AKT signaling pathway. In addition, this study also generated nanocomplexs (PBAE/si-ciRS-7), which can significantly inhibit RCC tumor growth and metastasis in vivo. The research and development of PBAE/si-ciRS-7 will provide new insights for the development of RCC gene therapy-related drugs in the future, which has important practical significance for the clinical treatment of tumors.

1. ciRS-7 is overexpressed in RCC tumor cells and tissues, which promotes cell proliferation, migration and invasion in vitro.

The researchers first used the GEO database to conduct data analysis and found that ciRS-7 was highly expressed in tumor and metastatic tissues (Figure. 1A-C). Then, agarose gel electrophoresis and Sanger sequencing are used to confirm ciRS-7 PCR product and its sequence, respectively (Figure. 1D). RNase R and actinomycin D assay showed that ciRS-7 was more stable than CDR1 (Figure. 1E, F). The qRT-PCR and FISH showed that ciRS-7 was predominantly localized in the cytoplasm (Figure. 1G, H).

Next, the expression of ciRS-7 in different cell lines and 85 pairs of tissues was examined, and the results showed that ciRS-7 was highly expressed in RCC tumor cells and tissues (Fig. 1J, K). It was further found that the highly expressed ciRS-7 was associated with greater tumor, higher Fuhrman grade, and worse survival were highly correlated (Figure. 1L). 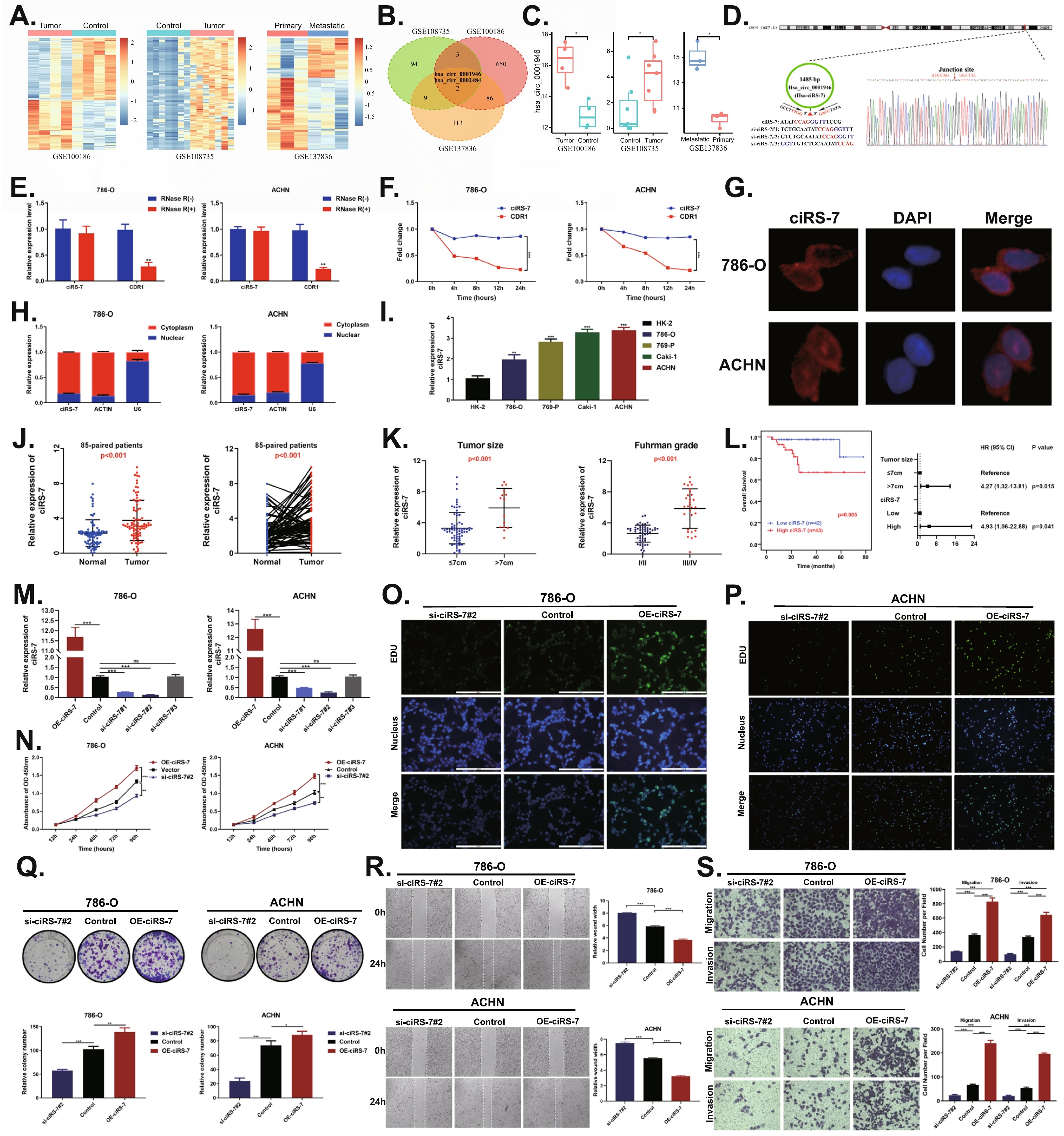 Figure 2: ciRS-7 is overexpressed in RCC tissues and cells and promotes RCC cell proliferation, migration and invasion in vitro

2. ciRS-7 acts as a sponge of miR-139-3p in RCC cells and miR-139-3p inhibits RCC cell proliferation, migration, and invasion in vitro

The researchers predicted potential miRNAs molecules that may interact with ciRS-7 by using software such as circBank, and found two potential target miRNAs (miR-7-5p and miR-139-3p) (Figure. 2A). Then, the interaction between ciRS-7 and miR-139-3p was demonstrated by RNA pull-down assay and dual luciferase assay. In addition, the researchers found that miR-139-3p expression was lower in RCC tumor tissue among the 85 pairs of clinical samples tested (Figure. 2B).

Subsequently, the researchers predicted potential miRNAs that may interact with ciRS-7 by using software such as circBank, miRanda, circAtlas, and RNAhybrid software, and found two potential target miRNAs (miR-7-5p and miR-139- 3p) (Figure. 3A). Then, the interaction between ciRS-7 and miR-139-3p was demonstrated by RNA pull-down assay and dual luciferase assay. In addition, we found that miR-139-3p expression was lower in RCC tumor tissues among the 85 pairs of clinical samples tested (Figure. 3B). The qRT-PCR results showed that both miR-139-3p-Mimic and miR-139-3p plastids increased the expression level of miR-139-3p (Figure. 3C).

Further functional experiments demonstrated that ciRS-7 acts as a sponge for miR-139-3p in RCC cells, and miR-139-3p inhibits RCC cell proliferation, migration and invasion in vitro. Transcriptome sequencing and protein-level analysis of sh-ciRS-7 and sh-NC 786-O stably transduced cell lines revealed that only TAGLN was downregulated at both the transcriptional and protein levels, and dual-luciferase assays also indicated that miR-139-3p can bind to TAGLN (Figure. 3D). In addition, KEGG enrichment analysis showed that the PI3K/AKT signaling pathway was significantly enriched. At the protein level, we found that miR-139-3p-Mimic could partially counteract the increased expression of TAGLN, p-AKT and p-PI3K caused by OE-ciRS-7 (Figure. 3E); miR-139-3p-Inhibitor could partially rescue the reduced expression of TAGLN, p-AKT and p-PI3K inhibited by sh-ciRS-7 (Figure. 3F). Further functional studies revealed the molecular mechanism: ciRS-7 could act as the "ceRNA" of miR-139-3p, activate the PI3K/AKT signaling pathway to prevent the degradation of TAGLN, and promote the progression and metastasis of renal cell carcinoma.

The researchers prepared nine different ratios of nanocomplexes according to the weight ratio of PBAE and si-ciRS-7, and finally found that when the weight ratio of PBAE and si-ciRS-7 exceeded 40, relatively homogeneous nanoparticles were formed. Excellent performance and high load efficiency (98%) were obtained with a PBAE/si-ciRS-7 of 80 (Fig. 4A, B). In addition, both TEM and particle size potentiometer showed that the particle size of the PBAE/si-ciRS-7 nanocomposite was about 160 nm (Fig. 4C, D). 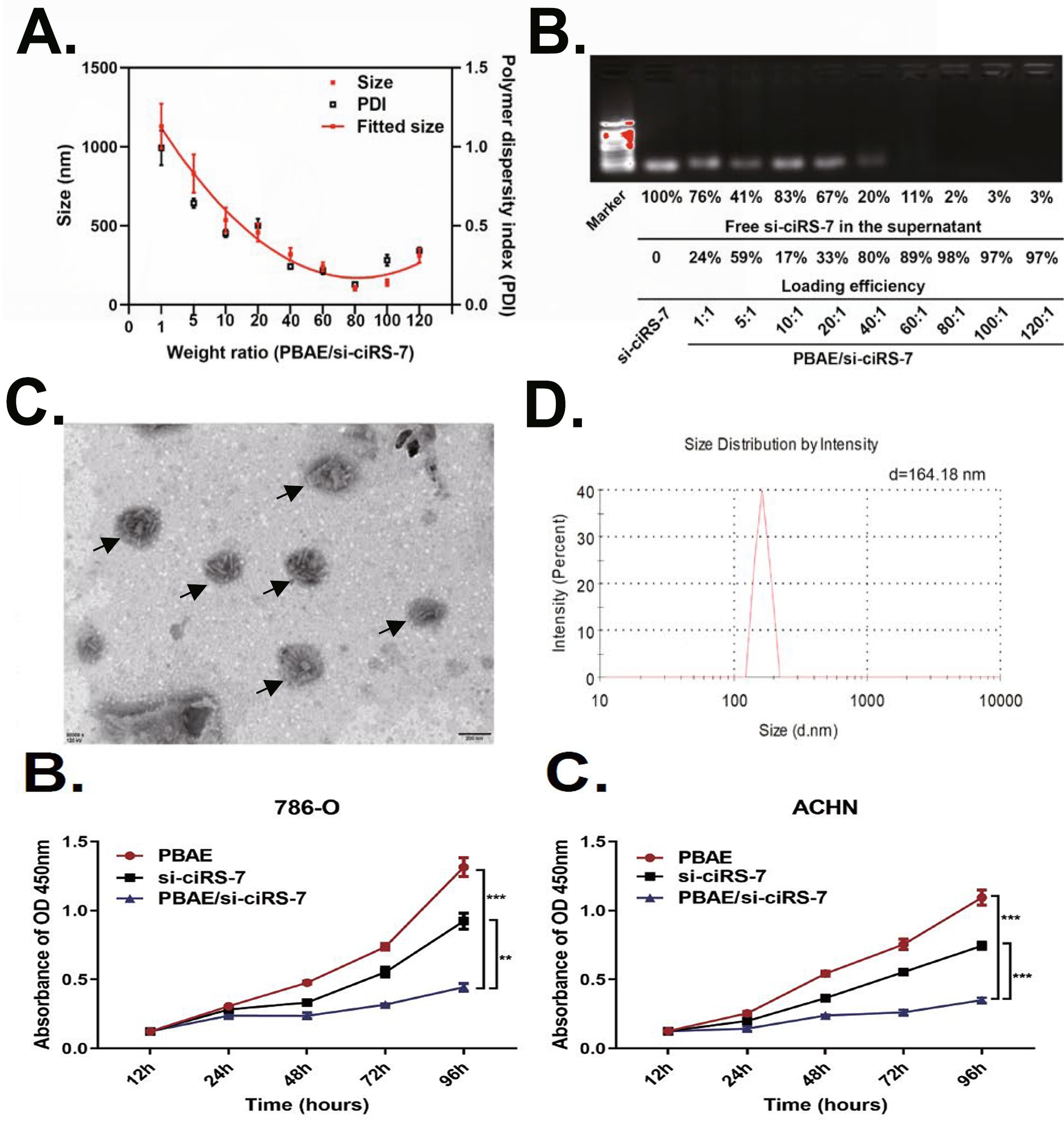 This study revealed a potential mechanism of action of ciRS-7 in RCC development and metastasis (Figure. 5). ciRS-7 could promote RCC progression and metastasis through PI3K/AKT signaling pathway by binding to miR-139-3p and blocking its inhibitory effect on TAGLN. In addition, this study also developed a nanocomposite targeted drug-PBAE/si-ciRS-7, which could significantly inhibit renal cell carcinoma tumor development and metastasis in vivo. This could provide new insights for RCC gene therapy and related drug development in the future. 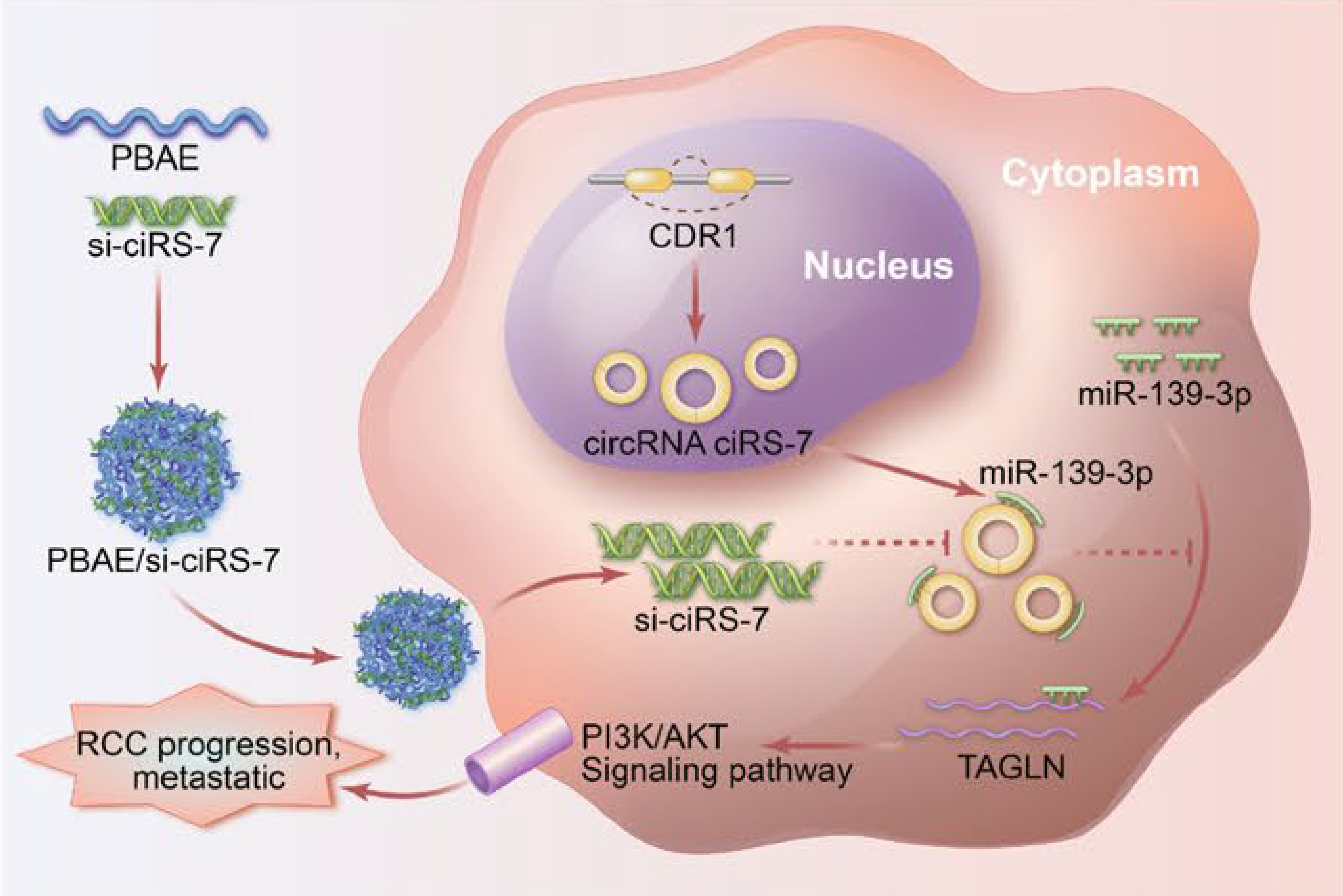 Vazyme's HiScript III 1st Strand cDNA Synthesis Kit (+gDNA wiper) (Cat. No. R312) and AceQ qPCR SYBR Green Master Mix (High ROX Premixed) (Cat. No. Q141) facilitate this study. The researchers used R312 and Q141 products to detect the relative expression of circRNAs and verify the interaction between ciRS-7 and miR-139-3p, further revealing that ciRS-7 plays a role in RCC cell proliferation, migration and in vitro. The promotion of invasion and the inhibition of miR-139-3p help to identify the potential mechanism of action of ciRS-7 in RCC therapy.

HiScript III 1st Strand cDNA Synthesis Kit (+gDNA wiper) (Cat. No. R312) kit contains a new generation of reverse transcriptase HiScript III Reverse Transcriptase and optimized optimal Buffer, which further improves the efficiency of one-strand synthesis. The gDNA wiper Mix in the components can quickly and completely remove genomic contamination, ensuring more reliable subsequent results, and simplifying the design of qPCR primers, eliminating the need to design primers across introns. This kit can not only synthesize full-length cDNA (up to 20kb) for downstream experiments such as cloning, but also synthesize highly uniform cDNA for qPCR quantification.

Vazyme always insists on serving customers with high-quality products, and expects to go hand in hand with more scientific researchers and climb the peak in all fields of life sciences.

• Optimized reaction system: The buffer formula suppresses non-specific amplification and primer dimers to the greatest extent, and is suitable for high-sensitivity qPCR reactions.

Vazyme offers more products to meet different needs of customers (click on the Cat.No. to see the detail of each product):